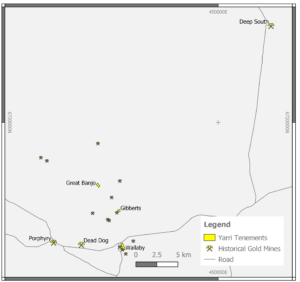 The tenements lie within the Edjudina Domain, which is bounded to the west by the Keith-Kilkenny Tectonic Zone (made up of the Yilgangi Fault and the faults bounding the Pig Well Graben) and by the Celia Tectonic Zone (more specifically, the Claypan Fault), which forms the eastern boundary. The domain hosts multiple west-dipping, west-facing homoclinal sequences of mafic to felsic volcanic layers showing lateral facies variation and is cut by low angle faults

Nelson Yarri project consists of three prospects on three Prospecting Licences to the North and East of the historic Yarri State Battery site.

Nelson Resources conducted a maiden 19-hole RC drilling program for 1183 metres at the Wallaby Prospect in January 2018 which delivered high gold intercepts including: