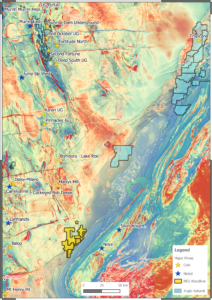 The Socrates prospect is located at the northern part of the project and lies in the Archean greenstone belt which are host of orogenic gold deposits.
Within the Woodline Project four prospect areas are identified. The whole area extends over 656km2.

The Redmill, Grindall and Harvey prospects are located at the south-eastern part of the project in the transition zone between the Archean Yilgarn-Craton and the Proterozoic Albany-Fraser orogen. This transition zone has been a new major Australian gold province known as Tropicana Gold Belt.